Do Huskies Bark A Lot? Explained 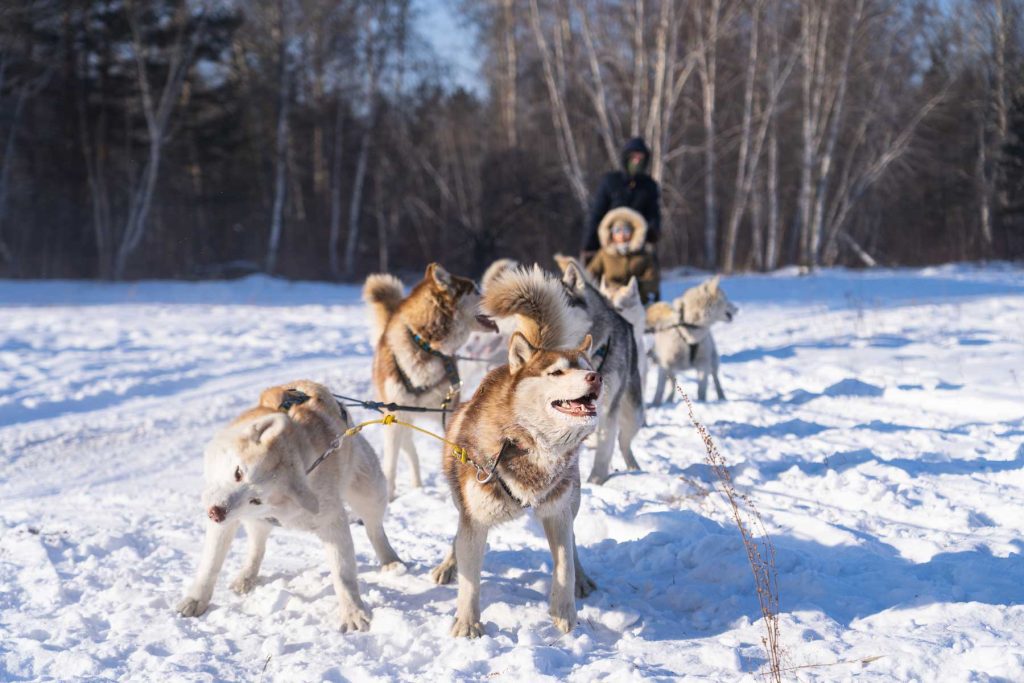 Siberian Husky is often ranked among the most popular dog breeds around the world. In 2021, Huskies were ranked at the 19th position in AKC's Most Popular Dog Breeds of 2021 list.They are known for their thick fur coats, which keep them warm in cold climates. Huskies come in a variety of colors, including black, white, gray, and red. They have piercing blue eyes and a distinctive howl that can be heard for miles.

Huskies were originally bred as sled dogs in Siberia. They are strong and agile animals with an incredible amount of endurance. They can run for hours at a time without getting tired and can pull heavy loads through deep snowdrifts.

Despite their wild ancestry, huskies make great pets for families with children. They are gentle creatures who love to play fetch or go on walks around the neighborhood and love to make new friends. But one particular question is asked many times when it comes to Siberian Huskies and that is ‘Do Siberian Huskies Bark?’ To know about it keep reading on.

Contents hide
1 Do Siberian Huskies Bark?
2 Why Do Huskies Not Bark That Often?
3 Why do Huskies howl instead of barking?
4 The Reasons Behind Your Husky Might Bark
5 Is it normal for Your Husky not to bark?
6 When Should You Worry About Your Howling Husky?
7 Conclusion

This is a question that has been asked by many people who are interested in owning this breed of dog. The answer, however, is not so simple.

Siberian Huskies were originally bred as working dogs in Siberia. They were used to pull sleds and help with other tasks. Because of this, they are bred to be strong and have high endurance levels. One of the main characteristics of these dogs is their ability to cover long distances quickly without tiring out.

This means that Siberian Huskies typically do not bark unless there is a real reason for them to do so. For example, if they hear someone coming up the driveway or if they see a stranger outside, they will likely bark in order to alert their owner or handler about the situation. Though that too doesn’t happen often as Siberian Huskies love to make new friends and usually don’t bark at strangers. However, if there is nothing happening that warrants a response from them, then you can usually expect them to be quiet and calm.

Why Do Huskies Not Bark That Often?

Huskies are one of the least vocal breeds. Unlike other dogs that bark constantly, Huskies only tend to vocalize when there’s a real reason – like when they want something or feel threatened.

There are a few different theories about why Huskies don’t bark as often as other dogs. One theory is that it has to do with their breeding – since Huskies were originally bred as sled dogs, they didn’t need to be very vocal in order to communicate with their owners. Another theory is that Huskies simply aren’t very motivated to bark – unlike some dogs who will bark just for attention or out of boredom, Huskies only tend to vocalize when there’s a real reason.

Whatever the reason may be, it’s definitely true that huskies aren't known for being big talkers! If you're looking for a dog who's content spending most of his time quietly by your side, then a husky may be perfect for you."

Why do Huskies howl instead of barking?

Huskies are known for their howling, which is often mistaken for barking. But why do Huskies howl instead of barking?

There are many reasons why huskies howl instead of bark. Some people believe that it is because they are trying to communicate with other dogs or wolves, while others think that it is simply a habit that they develop from being bred in colder climates. Huskies were originally bred as sled dogs in cold climates and would often howl together to keep warm while working and the sound of their howls could be heard over a long distance in the wilderness. Their vocal cords are also specially adapted to produce a loud, resonant sound.

Another reason why huskies might howl more than other breeds is that they are vocal animals by nature. They use their voices to express everything from happiness and excitement to sadness and loneliness, so it's not uncommon for them to start howling when they hear other dogs or humans doing the same.

Whatever the reason may be, there's no doubt that huskies have an adorable way of communicating with those around them!

Huskies are known for their adorable, distinctive howl yet sometimes they bark. But what are the reasons behind it?

There are a few different reasons why huskies might bark sometimes. One reason is that they may be trying to communicate with you. Huskies are very intelligent dogs, and they often try to use communication methods like barking to get their point across. If your husky is barking at you, it may be trying to tell you something – whether it’s that it’s hungry or wants to go outside, or something else entirely!

Another reason why huskies might bark is that they’re excited or happy. When a husky sees its family after being away for a while, chances are good that it will start barking in excitement! This type of barking usually isn’t anything to worry about – as long as your dog isn’t excessively barking all the time for no reason.

Finally, some huskies may bark out of fear or anxiety. Though Huskies love to make new friends and don’t bark at strangers usually if your dog barks when someone comes over or when there’s a loud noise, this could be a sign that he feels scared or anxious in those situations. In cases like this, you should work on helping your dog feel more comfortable in these situations, so he doesn’t feel the need to resort to excessive barking.

Is it normal for Your Husky not to bark?

There’s a misconception that all huskies bark, but this isn’t always the case. Huskies usually don’t bark, and there’s nothing wrong with that! In fact, not barking can be a good thing – it means your dog is less likely to disturb your neighbors or get into trouble.

If your huskies don't seem to want to bark, there are a few things you can do to help them feel more comfortable and confident. First of all, make sure they have plenty of toys and activities to keep themselves busy. You may also want to consider enrolling them in obedience training, so they know how to behave when someone comes over or when they see another animal. Huskies love to make new friends naturally, and that’s why they don’t usually bark at strangers or other animals. Above all else, be patient and understanding – after all, his personality is just as unique as any other dog's!

When Should You Worry About Your Howling Husky?

Many people love Huskies because of their friendly and playful manner and nature of howling instead of barking. However, they can howl for a variety of reasons. So, when is it time to be worried about a howling Husky?

There are generally various types of howling: the “I’m happy” type, the "I'm lonely" or "I'm bored" type, and the "I'm in pain" or "I'm scared" type. If your dog is only howling occasionally and seems otherwise healthy and happy, then he's probably just trying to communicate with you. However, if your Husky is constantly howling or only does so when he's alone or in pain, then you should take them to the vet for a check-up.

Howling can also be a sign that your dog isn't getting enough exercise or stimulation. A tired Husky is less likely to howl or whine than one who has plenty of energy stores. Make sure your Husky gets at least an hour of vigorous exercise every day; this may include playing fetch, going on walks/hikes/runs, swimming, etc.

Most huskies don't bark very often, as barking is usually a territorial trait. As huskies are not exactly territorial in nature, they are not usually considered good guard dogs. It’s also possible that your husky will start howling instead of barking when encountering a stranger. If your dog never barks or only barks infrequently, keep in mind that this is still normal behavior - he simply may not have the genetic tendency or external motivation to be a barker. So, if you are looking for a new furry friend that doesn’t bark instead howl when he needs something or to express joy or happiness, consider going for a cute, adorable Siberian Husky.