Dogs » Dog Health » Why Do Dogs Wink? Reasons and Explanation Behind It.

Why Do Dogs Wink? Reasons and Explanation Behind It. 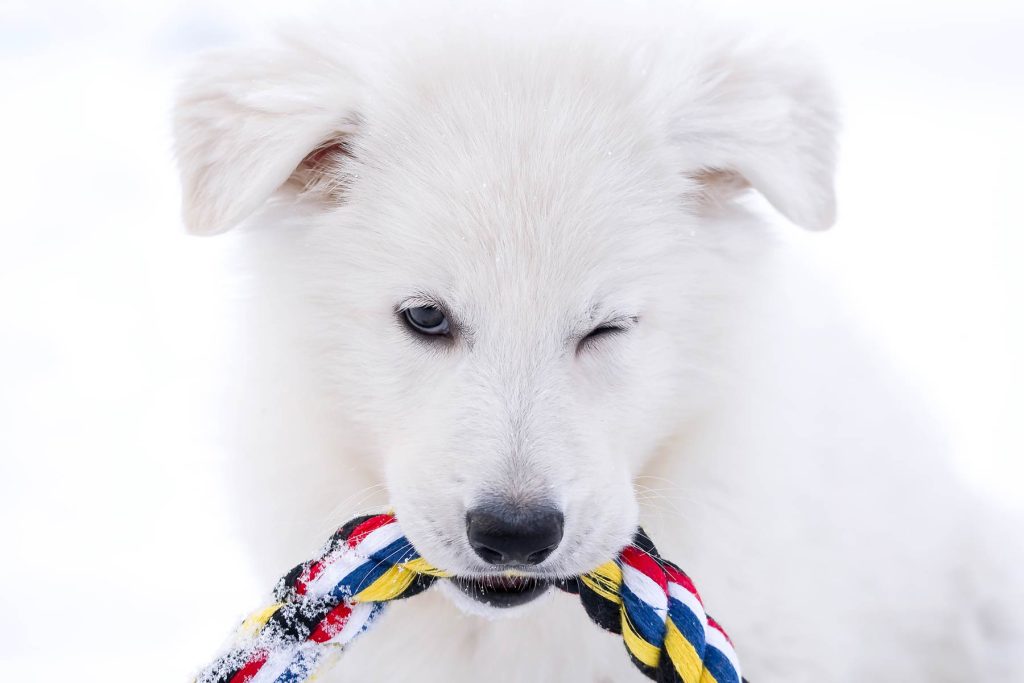 Imagine you’re doing something and your dog is right beside you. Suddenly you take a quick look at your dog and discover that he/she winks at you, making your heart skip a beat. You might start thinking if your dog winked at you or it was your imagination. A sudden thought might pop up in your head that winking is probably only a human trait. But it’s not. Your pet dog can wink too!

Do Dogs Wink at You on Purpose?

Dogs are one of the most popular pets, if not the most popular, around the world. Even though dogs can’t communicate in human language, dog owners know that dogs use different gestures and traits as their language to communicate with us. Winking is one of those gestures. To us humans, a wink is a friendly and warm gesture. If your dogs wink at you it can be on purpose or subconsciously. It can be either a good sign or a bad one.

There are several reasons why your dogs might wink at you. Following are some of the reasons behind your beloved dogs winking at you.

Your Dog Is Happy and Want Your Attention

Happy dogs want to show their affection however they possibly can. Hence sometimes they start rolling on their back and sometimes they wink while they’re being playful. Your dogs can do the same and by winking at you they express how much they love you. As dogs can’t communicate in human language, they use their body language and even their eyes to send their message to us to seek attention. And what can be more beautiful than happy dogs winking at their beloved human friends? If you ever find your dogs wagging their tail happily and winking at you, you can return the favor by winking back too.

Your Dog Is Being Submissive Towards You

If you ever happened to watch dogs fighting, you probably observed that before starting a fight, dogs keep staring at each other intensely. This is the way they want to show their dominance over the others. If one of them stops staring or looking down then he/she is considered being dominated. Otherwise, a fight starts to ensure who gets the crown of being the dominant in the pack.

As dogs love to communicate through their body language, dogs will sometimes send messages through their eyes. If your dog gives you a solid stare, it might be a dominant and aggressive one. But if your dog winks at you, it means accepting you as the dominant one. Also, dogs don’t blink when they feel they are endangered. But if it winks or blinks seeing you, it means your dog trusts you and doesn’t feel endangered in any way.

Your Dog Is Being an Imitator

Dogs, being very smart and intelligent, start imitating their human friends the more they stay together. Normally it starts with the small things. Your doggy wants to eat when you are eating, sleep when you are sleeping, and even yawn when you are yawning. From the small gestures, you might understand that your cute pooch has started mimicking you.

And if you have a habit of winking, there’s a high possibility that your dogs have been watching you do this often, and thinking of it as a good thing they started imitating. This imitating behavior of dogs makes it easier for the owners to train their dogs. If your dog is winking by imitating you, you can use this trait as an advantage later.

Your Dog is Having Health Issues:

Unfortunately, this one is the worst possible case for both you and your dog. Your dog could wink or blink as a result of potential health issues.

Your dog might wink or blink with one eye due to some irritation in that eye. Sometimes a hair, some dust, or chemicals could enter their eyes and create a form of irritation. If this is the matter, your dog will try to blink repeatedly which at first you might misread as a healthy wink. This being the case, you probably will see your dog rubbing the eye continuously or scratching the irritating eye.

There’s another issue regarding the winking of the dogs that may arise which is called entropion. In the case of entropion, the upper or lower eyelid of your dog gets flipped inwards, and the small hairs of the eyelid touch the surface of the eye. These hairs scratching the surface of the eye is very irritating and a major health concern for your dog.

If you think your dog is having irritation in the eye or winking or blinking one eye too much, and feeling uncomfortable, contact the local vet as soon as possible. The vet probably would want to examine your dog at their office. Take your dogs to the vet immediately.

Can I Train My Dogs to Wink?

Yes, you can. If you love it when your puppy is winking with one eye closed and wonder if you could make it happen whenever you want, then we've got you covered.

The famous physiologist Pavlov made an amazing learning strategy that is called classical conditioning. He fortuitously found that his puppies would drool seeing the person who used to bring them their meals, whether that person had any food with him at that moment or not. You can use this classical conditioning in your training to make your dogs wink whenever you wish.

In this strategy to train your dogs to wink, the sound of a precise word (in this case “Wink!”) would signal something (like being touched on a whisker) and lead your puppy to react (by blinking) to that word like he/she would react to when touched on their whisker.

Here’s how you should do it:

After this, if you say “Wink!”, your dog will wink at you with one eye closed as if you two are sharing a secret. How cool is that!

To summarize, winking is a very gentle behavior seen in dogs. If your dogs wink at you while being healthy, it’s a cute gesture. Understanding your dogs’ body language can give you the advantage to know the reason why your dogs wink at you. Seeing their wink at you, you can also learn what they want from you. Understanding their health issues or how their mood is a child’s play if you can solve the puzzle of why they are winking. It will significantly strengthen the bond between you and your doggo, the most trusted living thing you can have by your side.